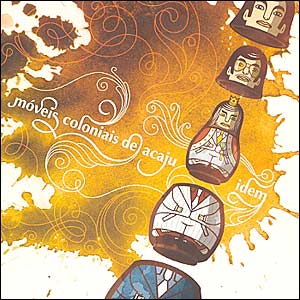 A friend of mine introduced me to this band from Brasília in late 2006. Their songs are simply crazy. A creative mix between rock, ska, samba, swing, and eastern European sounds. It is the kind of music you can (and will) repeatedly sing along with the vocals and with the instrumental part. I can say that after listening to their album “Idem” for 1,5 years, I’m still able to go from São Sebastião (where I work) to São Paulo (about 2h30 trip) happily singing their songs along the way…

Yesterday I finally got the chance to see them live! And they are great. Móveis Coloniais de Acaju (could be translated as Colonial furniture made of a mahogany-like wood) is composed of 10 skilled musicians that create a spectacular atmosphere on stage, always dancing and interacting with their audience. During the song Copacabana (one of their hits), the crowd opens up a circle and most of the band (with their instruments) get off the stage to play the song’s instrumental interlude with their fans. After they are absorbed by the crowd (and still playing the song’s climax) they magically re-appear on stage! Crazy.

They have released an official music video of the song Seria o Rolex?, you can watch it below.

Also, there are tons of fan videos with them playing live, here. As many growing independent bands from all over the world, Móveis Coloniais de Acaju know the importance of their fans and the internet to spread their music. Each musician post entries to their weblog, songs are available for download on the official site and you can also buy a hard copy of the album Idem at Amazon. You will find them at MySpace (where you can read André Abujamra‘s description of the band).

Tagged as Brazil, self hosted