I first listened to gurdonark’s music on the excellent ccMixter. He is a great enthusiast of free licensing media and collaborate with many remixes and soundtracks for videos. Now, he has released a very interesting album on Jamendo called Seven Virtues.

All sounds were sampled from a wooden mallet hitting an Orrefors crystal! Samples were digitally modified and the result is an originally textured slightly electronic sound. Songs have the characteristic mark of gurdonark of creating a different atmosphere and taking your mind to a soundtrip.

I recommend reading the album description written by the author, on Jamendo. Enjoy the experience!

Tagged as by, Jamendo, USA

Tom Fahy (Quinn McCarthy) was the leader of this experimental band together with Jiang Dan, Rachael Eisley, Zhang Li and Liu Kaige, until he died in June 2008. In September, 79 albums of the band were uploaded to Jamendo. Seventy-nine, amazing. And they are indeed a tremendous source of instrumental music from experimental to classical.

These two albums are a nice soft experimental jazzy trip. Very good atmosphere to relax or just do pleasant things. The firsts songs from each are my favorite for now… very inspiring 🙂

kARHu – Sinfonia For The Blunt Sword

kARHu - Sinfonia For The Blunt Sword

This album is a masterpiece! Based on and initially conceived for being an alternative soundtrack for the science-fiction movie Metropolis, by Fritz Lang, the movements have complex and original arrangements. A mixture of orchestral elements with glitch, soft synth beds and spoken words, urban and cinematographic atmosphere… Each song has a rich diversity of sounds and moods, but are well connected under a common theme that excites your imagination!

Ok, no more written words, take your time and enjoy!

kARHu – Sinfonia For The Blunt Sword

Sometimes I feel like listening to music I already know. The satisfaction of predicting each song’s fate is powerful. Different, but equally enjoyable, is the taste of new music. It defies our brain processing capabilities, until it solves the patterns. The music then, becomes known. Sometimes, however, it is not easy to process the music, it might have unusual combinations, or too many elements which force ourselves to run over a few (or a lot) of details. There lies the joy. Hovering for the details, not random, but unexpected. Unexpected and yet, beautiful.

Intensive Care – All The People Hear With Me

Intensive Care – All The People Hear With Me

Intensive Care is a colorful band with some colorful tunes. Their last release, an EP called All The People Hear With Me, has 2 nicely laid songs with some quite original arrangements. You might listen to Sirenhorses to understand what I mean. I really liked the vocal melodies and how the song develops, grows and fades. 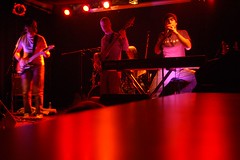 Below you can read what Intensive Care is… Enjoy!

Sirenhorses – All The People Hear With Me

Comments Off on Intensive Care – All The People Hear With Me

Tagged as Canada, self hosted

Vate’s new album (Volt) came out harder and darker into the electro music. These experimental tunes create a thick robotic atmosphere. Two albums from Vate I also like a lot are Volk and Cachonda. You can find out more at www.vate.com.mx!!!

Excellent jazz solos and themes from Italy. It does remind me of something in between Hermeto Paschoal and Michel Portal… very interesting experiments. Check them live or at myspace!

Comments Off on OPRACHINA – The jazz farm Plutei are born in the seawater. They represent a specific life stage (larva) of some marine invertebrates, the Echinoderms. Most of them are less than 1mm long, so tiny that inertial forces are dominated by viscous forces of the water. Just imagine if air was honey and we had to go for a walk… Plutei can swim and feed in this environment using their long arms and cilia. However, Plutei are ephemeral. They swim (and eat) for weeks or maybe months, before something else takes place. Currents can take them really far away from the place they were born. Millions of Plutei are born at once. How many would survive? How many would be thousands of miles away? How many would get proper food and not be eaten? Plutei carry the tissue of adults inside them. The food they eat, goes to adult tissues. In the end, the adult in formation takes over the larval body and the Pluteus is gone.

Plutei are part of the ocean’s hidden life. Organisms we can’t see easily, but that certainly got in between our toes when walking along the beach, or were swallowed during a swim… Its crazy and different “life” inspired the first compilation of songs from ccNeLaS, The Pluteus Trip. Download and listen, hope you like it! Go to the compilation page or continue below.

please report any problems to me!

What if “In Rainbows” was a Jamendo release?

The following lines are based on scattered data, flawed statistics and biased ideas. The author has no responsibilities over its consequences. It is pure imagination.

As it is widely known, Jamendo shares half of its ads revenue with artists. The amount is calculated based on pageviews of published album. According to my account, the average for the last 7 months in Jamendo was €0.00205/pageview. How many pageviews does inrainbows.com has per day? I don’t know.

Statbrain says it has 41773 visits per day (with accuracy of 49.9%). As the album’s page at Jamendo are pretty straightforward, a visitor might create around 2 pageviews. If the $/pageview relation above keeps the same average value, Radiohead would get €170.96/day and €5128.74/month. That is 5 times more than the band with most income from Jamendo! You see how Jamendo’s system works indeed thru the audience power.

At Jamendo fans would not be able to “pay what they want” to download “In Rainbows”, because you always download for free. Fans would download it for free without filling forms, fans would get cover art, ~200kbps mp3 or ~300kbps ogg downloadable by Bit Torrent (as they are doing right now) and eMule, fans would review it, rate it and share with others, put a widget on their website to spread it, and if they feel like supporting the band, they could (and would) do it anytime thru a donation (directly at the album’s page). Did I mention no bandwidth costs? Of course there would also be a link in the album page at Jamendo pointing to their official website, so people would go and order the tasty discbox.

Fans would be happier? Band would be happier? Can’t say, but I think so. As Radiohead has a huge audience, it might not make a big difference for them… but maybe, a few hundred fans would stop to see what the heck is Jamendo. Some would explore just for curiosity some other albums… people would start to realize there is a lot more music out here. Maybe break down the myth that free-music has no quality. Maybe a dozen or so would start exploring other music communities, netlabels and blogs (see some of them at ccnelas “bottombar”) and discover wonderful tunes for their lives.

Maybe next time, Radiohead! I really want Jamiroquai to read this post…

Tagged as In Rainbows, Jamendo, self hosted

Monokle created some melodic tracks fusing synths with a bit of piano and guitar. There is also a stranger experimental feeling in some songs, quite nice!